Essex will win their eighth County Championship barring an incredible final day of this season in which Somerset will have to bowl Essex out twice, and very cheaply. The pitch has been turning but not that much.

A sodden outfield, topped up by showers, prevented any play on day three and slowly killed off any lingering Somerset hopes of their first ever championship. Instead they appear destined to finish runners-up for the sixth time in this century.

Somerset have yet to dismiss Sir Alastair Cook once, let alone twice, as Essex have reached 25 without loss in reply to Somerset’s 203. Free from Test calls, Cook leads the stronger batting line-up which Essex have, in addition to the leading wicket-taker in the first division, Simon Harmer with 83 wickets – much the same formula that won Essex their last championship in 2017.

Somerset’s batting line-up is more like England’s in that sometimes it could be reversed, at least when Jack Leach is promoted from number eleven to nightwatchman or opener. Their bowlers have had to do much of their batting as well as the bowling.

“I have total belief in our players and staff,” Somerset’s director of cricket Andy Hurry said optimistically. “This summer there has been some amazing cricket, with huge twists and turns. Anything can happen and we have to keep believing.” 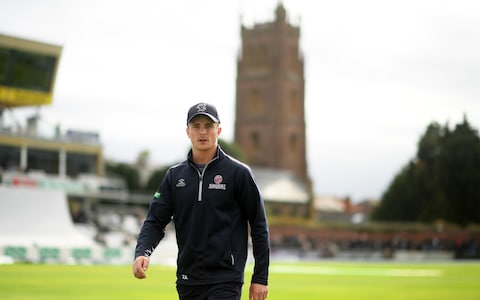 In the only first division game to have play, Surrey’s Ollie Pope celebrated his recall to the England Test squad by completing his eighth championship century, 106, in a third-wicket stand of 222 with Scott Borthwick, who reached 137 against relegated Nottinghamshire.

The difference in the quality of bowling in the two divisions was emphasised when Dawid Malan and Billy Godleman both reached 1000 runs for this season in the second division, during Middlesex’s match against Derbyshire, making six batsmen in all. Dominic Sibley is alone in scoring 1000 runs in the first division – although Cook will join him if he reaches 165 against Somerset.

As Glamorgan’s chances of a victory have been washed away at Durham, Gloucestershire and Northamptonshire need not force their game at Bristol in order to accompany Lancashire into the first division, which will have ten counties next season, while the second – or sink – division will have eight.

triathlete Alistair Brownlee on what it takes to be the best

Cynics like to cast aid as a waste of money. Try telling that to Jasmine and her classmates in Afghanistan

View all posts by news vendor →